The Viceroy L’Ermitage Beverly Hills hotel will be up for auction Aug. 19, with the minimum bid starting at $104 million.

The Viceroy L’Ermitage Beverly Hills hotel could have a new owner soon.

The luxury hotel, which was seized in a money laundering scandal involving financier Jho Low, will be sold at auction Aug. 19.

Matthew Bordwin of real estate brokerage Keen-Summit Capital Partners, who is handling the sale, announced July 9 that a stalking horse bid of $100 million had been accepted by Michael Eidelman, special master appointed by the United States District Court for the Central District of California.

The stalking horse bidder, Bordwin said, was a corporate entity. The company behind it is a confidential investor “with significant hospitality experience.”

An open auction will take place Aug. 19 where the minimum bid starts at $104 million. Interested buyers must submit identification and financial information by Aug. 3.

Bordwin said he could not speculate how much the property would end up selling for but expects it to generate significant interest.

“It was an interesting time for us to come to market in the middle of Covid,” Bordwin said. “The hospitality market is taking a beating. We found that this is a unique trophy property and a once-in-a-lifetime opportunity to get a true luxury hotel in Beverly Hills.

“It’s a special asset, Bordwin added. “As you can tell from the price, Covid ultimately didn’t play a role in the sale. You don’t get an opportunity like this very often.

“It’s a trophy hotel in an A-plus location, which says a lot about well-located, quality hotels,” he added. “Even during this pandemic, there’s been a lot of interest in this asset and not a lot of hotels have become available in Beverly Hills.” 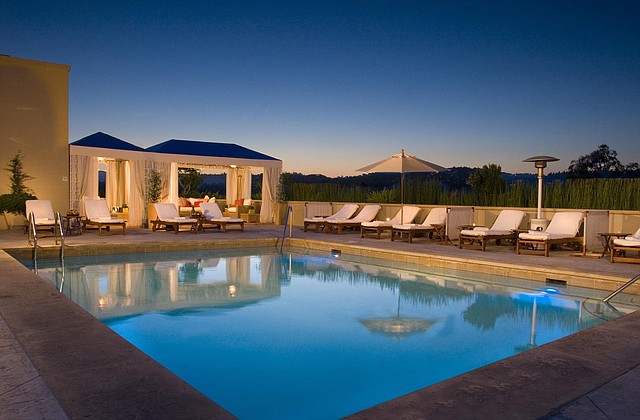 The rooftop pool at the Viceroy L’Ermitage Beverly Hills hotel offers 360-degree views of the city and private cabanas.

The hotel, which was developed in 1975, has 116 suites, a rooftop pool, library lounge and meeting and event spaces.

It is located at 9291 Burton Way, less than a mile from ritzy Rodeo Drive.

After a winning bidder is chosen, the sale will be subject to court approval. Bordwin said the deal would likely close around 30 days after the auction.

The hotel is the latest Low property to be auctioned off following his involvement in a $2.5 billion fraud scheme.

Low was investigated after being accused of embezzling from a Malaysian sovereign fund. The money was allegedly used to make several purchases, including Van Gogh paintings. The hotel is the last of Low’s seized assets to be sold.

Reay said that based on the Montage’s per-room sales price, it would not have been unreasonable pre-Covid for the Viceroy L’Ermitage Beverly Hills Hotel to fetch $200 million. But he’s unsure what the purchase price will be now.

Hotel sales volume April through mid-June was down 90% compared to this time last year, Reay said, but buyers are starting to be “a little more optimistic than they were a couple of months ago.” He added that some potential buyers are looking at properties with large suites that can potentially be converted into apartments or condominium buildings.